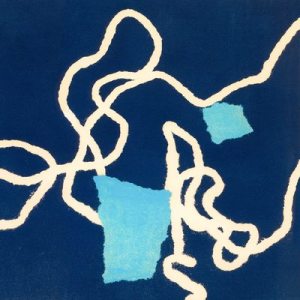 Credit the good folks at Thrill Jockey for bringing this release the attention it deserves; Honey is exactly what we need in our tea.  Peals‘ album was initially released in 2016, but never properly submitted, which is how we missed it. Turns out it’s one of the best releases of that year, and holds up perfectly well four years later.

A new video for “Wild Honey” is the bonus of this new pressing.  Steph Mantis uses microscopes to delve into the sweetness of the hive, and adds bee sounds to the start of the track.  Ripples of guitar and liquid cascade as one.  Individual droplets are lost and found again.  The screen becomes a galaxy as William Cashion and Bruce Willen create galaxies of sound.  It all accelerates when the glockenspiel arrives: the visuals, the tempo, the heart rate.

Then YouTube kicks us back to 2017 to see Albert Birney’s video for “Trillium,’ which definitely would have made our Top Ten Videos of 2017 (which I can say because I wrote that article!).  This video is so immediately and utterly charming that I can’t hear the song now without smiling and sometimes even laughing out loud.  The track was played for a class of 5th graders, whose reactions were incorporated into the video.  The glockenspiel is back, and one of the students can’t resist tapping his pencil in time.  The teacher writes a 5-word suggestion on the board, and off we go into fantasy land!  Cricket Arrison makes a great T-rex.  The woman in the room … was buying the CD.

Oh, wait, there are other songs on here too!  I did not mean to neglect you, I’m so sorry!  Just because you don’t come with videos doesn’t mean you’re not awesome.  I’m tapping my toes to you, “Becoming Younger.”  You’re a great album opener, don’t let anyone tell you otherwise!  “Essential Attitudes,” YOU are essential!  And isn’t it great that your name makes so much sense in 2020?  You were ahead of your time!  “Grapefruit,” did you know we reviewed a whole album about grapefruit just yesterday?  Perfect timing, and thanks for the drone!  “Koan 2,” you are warm and enveloping, and yes, we do remember your big brother “Koan 1” from “Walking Field.”  Can’t believe he’s 7 already.

The banjo and 16mm loops of “New Year’s Whale” take us back, but also nudge us forward.  In a year in which time seems distended, and the past and present intermingle, does it really matter when these songs were recorded?  They sound great right now.  As Peals released an album in 2013 and a second one in 2016, this should mean we can look forward to a third album soon.  (Richard Allen)