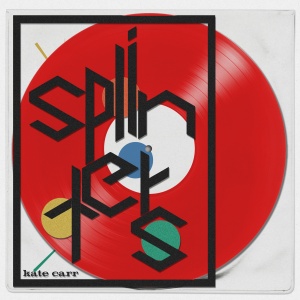 Kate Carr continues to offer relevant, timely music during the pandemic.  In April she released Where to begin, a love letter to letter writing.  This month she’s produced a tribute to the performance space TACO!, which might have been called TACO NIGHT!, but the participants are probably sick of hearing that by now.  And in conjunction with Sheryl Cheung, she offers another lovely slice of life, an ode to cycling in both London and Taipei.

As in our Fall Music Preview, we call your attention to Louise Mason‘s eye-popping design for Splinters, a combination of bright colors and wild font.  The look of the record highlights the unique nature of the London gallery, as well as those whose exhibitions have graced the space.  To create this amalgamation, Carr recorded everything about the location: travels to and from, internal construction, visitors and performances.  One hopes this vinyl souvenir is available in the gift shop and sold until the end of time.

The sound design is mesmerizing, as it reflects the space, the perception of the space and the idealization of the space.  Almost immediately, static sounds begin to wander speaker to speaker in “Detritus Clouds,” playing over the sound of looped construction.  (That is, unless these particular workers are inordinately rhythmic.).  Given this gentle launch, many will be surprised to hear guitar blasts introduce the next piece, along with an electronic assault.  This lasts only a few seconds before the album’s low drone returns; but the piece concludes with orchestral snippets and more guitar.  One thinks of the sudden awe of turning a corner to encounter a painting that takes one’s breath away.

“Skin on skin,” a narrator intones.  We’ve moved to the next piece, but the transition is seamless, like a well-designed museum.  Intricate electronic pings decorate the foreground while a newer drone rests in the back.  And here’s that orchestra again, doubling back.  Very rarely do we hear such sonic variety in a single work.  In contrast, the shortest work here is the most amusing: 23 seconds of what sounds like a piano playing at an opening, making a direct connection to the venue.

The outdoors is invited indoors.  Children frolic, birds chirp, water flows, cars pass.  Is Carr a visitor remembering her travels, or a traveler remembering her visit?  The concluding piece is a gift to the parents of distracted youngsters, as “time out” is threatened; the irony being that the invitation of TACO! ~ and this collection ~ is to take time out to listen.

Another type of time out is implied by Cycling.  One of the biggest pastimes during the pandemic, cycling has produced a demand so high that manufacturers have been unable to keep up.  Carr and Cheung connect their worlds through wheel and breath, chain and spoke.  This piece was written in direct response to the current crisis, and offers a new take on the sport: the fact that a bicycle can be used as a musical instrument.  While these bicycles travel through soundscapes of their own ~ for example, a Taipei street festival ~ they also become their own soundscapes.  The natural sounds of riding are blended with the human sounds of spinning wheels and tapping on frames.  Air passes through tires, producing found tempo.  We make our own music in response to the music around us.  To repurpose Donne, no woman is a sonic island.  A soft heartbeat emerges late, but it may be the sound of tires over humps.  Either way, body and landscape are connected.

This collaboration pairs well with Where to begin.  We’ve started to form a sonic photograph of 2020, marked by quiet squares, ventilators, protests and the supportive banging of pots and pans.  But Carr and Cheung eschew the obvious, concentrating on everyday sounds that have taken on new meaning: the scribble of words on paper, the spinning of wheels, the passing of traffic.  By making the ordinary sound extraordinary, they expose the holiness of daily living.  This observation was important before the pandemic and has added significance now: to lean into the world’s soundscape is to become one with creation.  (Richard Allen)