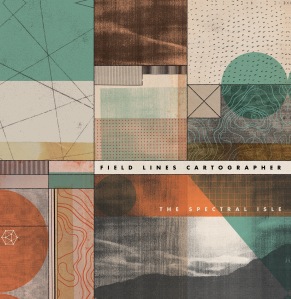 The Legend of Hy Brasil provides fertile ground for the imagination.  This mysterious island off the Irish coast is said to be surrounded by mist and to appear only every seven years.  Appearing on nautical maps for a mere half-millennium, it was “discovered” only once by a captain who wrote of the island’s black rabbits, its mysterious magician and large stone castle.  In 1980, its location was purportedly revealed by a man who touched a UFO.  The fun of the legend is that it could be true, especially in such a surreal year.

Mark Burford (Field Lines Cartographer) offers a sonic tone poem in The Spectral Isle, preceded by an evocative video.  “Magic Lanterns” opens with a view from above, recalling Yann Arthus-Bertrand.  The music is gorgeous, suggesting shores.  Large waves produce foreboding foam; it would be hard to land on some of these outcroppings.  And then the mist and the bunny, as gentle synths produce a sense of anticipation, akin to that on the start of a journey.  Burford reports that the first two tracks represent the trip to the island, akin to the opening of “King Kong.”  Soon the waters settle enough to descend to sea level.  If nothing else, the video makes one want to take a sea trip around Ireland.  The skies shift and swirl; the remains of the castle are seen; the music grows thick with drone.  When the sun sets, the moon seems to produce a different kind of music: hushed, awe-filled, scoring the arrival of the Milky Way.  And finally, there it is on the map.  Will you go?

Side A closes with wind and sub-harmonic tones, a hint of what is to come.  Burford admits that Side B is “darker and weirder,” a reflection of the isle itself.  The synths fill with trepidation.  What was that sound?  Suggestions of strings decorate “Black Rabbits,” while chimes suggest ancient rituals.  If the magician is really there, what will he think of our cellphones and navigational equipment?  Will he think that we are the magicians?  Or is the old magic still more powerful than the new?

In the eighth minute, a new round of synths briefly surfaces, then sinks.  The music grows ever hushed.  As the track winds down, one imagines hearing the hum of Ley lines.  “The Castle” is even darker, yet preserves its tempo until midway, when every percussive sound vanishes like the last person in line in a horror film.  The album closes on a more pensive note as the inner sanctum is breached.

Has anyone heard from Mark?  It would have been even more fun to spread a story that the composer disappeared shortly after the composition of this work.  In a year of harsh reality, fantasy arrives as a reassurance that we can make up stories better than the one we’re in.  (Richard Allen)