Charles Spearin & Josefin Runsteen ~ Thank God the Plague Is Over 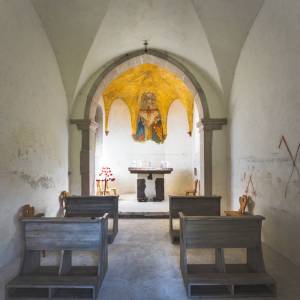 Imagine waking up to this headline: Thank God the Plague Is Over.  What a joy that would be!  This was the sentiment in the mid-1300s after the Black Plague had passed, having left as many as 200 million dead in its wake.  This week as the world approaches one million deaths from COVID-19, there seems to be no end in sight; yet we know that one day, this too shall pass.

While this album could not be any more timely, it was recorded in July 2019 and received a soft release on Christmas Eve ~ which fits its theme but is a terrible time to release a new album, much less a non-holiday album!  (“Merry Christmas, Johnnie, shall Mommy and Daddy play some plague music?”)  Thankfully, the Arts & Crafts label rescued it for re-release.  The pedigree is so high that we’re surprised the album hasn’t received more attention.  Organized by Feist and Damien Rice, performed by Charles Spearin (Do Make Say Think) and Josefin Runsteen (Ane Brun), and recorded in Castel Campo (often associated with The Sound of Music), Thank God the Plague Is Over screams quality before a single note is played.  When Searin’s nyckelharpa and Runsteen’s violin begin to play, the enchantment is instantaneous.  Gyða Valtýsdóttir even joins them on cello for one track.  The iTunes version is missing two tracks, so be sure to buy from the link below!

The halls are resonant, the hills are alive, and the relief is palpable.  In this sanctuary, people wrote their prayers of desperation, later overwritten by prayers of gratitude.  In the opening piece, the duo bursts from the gate with exaltation, the title a nod to The Sound of Music.  After this overture, the meat of the business begins: an eleven-minute track, by far the album’s longest, whose original title (“Chiesa di san vigilio”) has been replaced by a sobbing emoji. 😭  It’s a startling change, translating the pain of one century against another, a reminder that northern Italy ~ the site of the recording ~ had it the worst in the early days of the new pandemic.  The music churns, rails, raises its hands to the heavens.  From whence shall my help come?  The sorrow deepens as lower notes enter in the closing minutes.  The hospitals are overrun.  The bodies begin to pile up.  In 2020, history repeats.

The longest track ends as the musicians fall silent, exposing the sound of “sparrows in the rafters.”  Since the sparrows inhabit a chapel, it’s a stone’s throw to the old hymn, “His Eye Is on the Sparrow” and the Scripture, “You are worth more than many sparrows.”  The comfort of creation stirred the performers, as did the humble architecture and the prayers of those long gone.  Yet first they must reflect the anguish.  The English translation of Gyða’s track is “Blood Moon,” a phrase that may depict an eclipse ~ or an apocalypse.  And then one of the two tracks found only on Bandcamp, “Viva La Castel Campo,” a more restrained, tender prayer that rises to frenzy as it develops.  While these may be improvisations, they come across as inspirations.

“Istäcke” (“Ice Sheet”) is one of the album’s most memorable pieces, sporting what might be interpreted as a chorus.  At this point the ice begins to melt, the curve begins to flatten, and the people dissolve in praise.  Giddy excitement inhabits “Follow the Spiders!”, which initially bore the title “Hoppla” (“Oops”), but makes more sense as the next title is translated “And Now, Follow the Bats!!!!”  The suspicion that COVID-19 came from bats only underlines the album’s prescience.

“You Are Loved” needs no translation: a vocalized, wordless prayer.  Benign forces balance the malevolent.  Life follows death follows life.  One day we too will frolic in the streets and proclaim, “Thank God the plague is over!”  As the finale declares, “time is a measurement of desire.”  We hope for what we cannot see, but trust in its arrival.  In the interim, we weigh the existence of an album whose time has finally come, and wonder if it was always part of a larger plan.  (Richard Allen)