A trio of new releases from Marc Richter demonstrates the artist’s versatility.  Each possesses its own flavor and appeal, and together they form a wild tapestry.

A C of M is the angry one, which is to be expected as it was recorded in the early days of the COVID crisis.  The recording sessions were quick, and the moods are all over the map.  F-bombs abound, and the entire project is imbued with harshness, although tender moments still surface from time to time.  As many of the samples stem from Twitter (i.e. “people shouting and swearing at each other in streets and in supermarkets”), the set operates as a time capsule.  Laughter turns to tears, melody to abrasion. With 18 tracks breezing by in 44 minutes, there’s not much time for introspection, but plenty of time for reaction, a commentary on our current crisis.   Some fun titles include “Starbucks Opera” and “Zoom Meeting On A Dissecting Table Of A Sewing Machine And An Umbrella.”  But the most fun is had when encountering something wholly original, such as the duet between car horns and arguments on “Gratis Jazz 2,” punctuated by silence, which almost makes getting stuck in traffic sound fun.  To our knowledge, no one else has ever thought of this.  As the liner notes warn, the album may be “schizophrenic,” but so is the world these days. 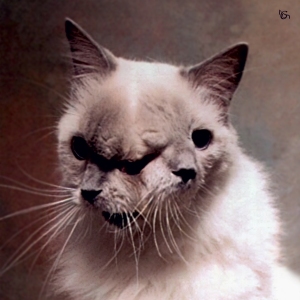 Une Fille Pétrifiée is a more unified recording, but it’s just as diverse.  We’re not sure if that’s a real cat on the cover or a photoshopped mutant, but we hope it’s the latter.  Poor kitty.  This image, along with the first two titles (“Enter Mirror Hotel,” “Satyre et Hermaphrodite”) hint at a tug of war between genres and ideas.  As the album begins, classical, jazz and opera loops trade places.  A surreal piece of shock fiction connects the dots, but its very nature defies categorization.  Field recordings add texture, but little context; this is a fever dream.  Why is the girl petrified?  Mouchoir Ètanche isn’t that scary.  Even “Music in the Dark” has a guiding light: sounding brass in the middle of gas and drone.  In “Sécheresse” (“Drought”), children play over the sound of church bells, while in “Le temps isolé” (“The isolated time”), birds and organ drown out the sound of sirens, rather than the other way around.  The organ returns throughout the album, offering a sense of safety that reverberates in opposition to the agitation of A C of M; and the final track includes a soloist and choir.  Seldom has an artist been so impossible to predict, a huge part of Richter’s appeal.  At this point, we have no idea what to expect from the artist’s third autumn album: holy or harrowing?

Parts of Oocyte Oil & Stolen Androgens have been circulating for a while as part of sound installations.  We’re not sure what those things are on the cover: jello molds?  Jellyfish?  Melted people?  But we do know the album’s theme: “an exploration of the human voice.”  Some familiar sub-themes are present: synaesthesia, dreams, alternate realities.  Yet Richter also offers a statement about music’s accessibility, saying that good music need not be “atonal, abstract or difficult.”  We agree, though spoken word lyrics such as “there was a battle and slaughter, piles of corpses and blood like water” don’t exactly scream Top 40.  That’s why it’s amusing to note that the title track mulches popular vocal snippets into a piano-led, AC piece.  People who buy the album on the basis of this ambient-minded single are going to be really surprised when they hear the rest of the set!  Sample after sample is smudged beyond recognition, awash in seas of drone; until the closer, when spoken word, piano and programmed video/hip-hop beats crash into drums, brass and orchestral surges: three generations of music battling, none declared the victor.  And that’s the way it is with Richter: he provides the ideas; the interpretation is up to us.  (Richard Allen)