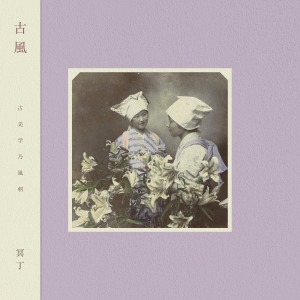 The third in a trilogy that began with Kwaidan and continued with Komachi, Kofū is another brilliant release from the mind of Meitei.  Each release has its own timbre; the first was unsettling (and was placed in our feature Music for Haunted Houses); the second was nostalgic; the third is celebratory.  Moving from dark ambient to ambient to fractured trip-hop, the artist demonstrates a rare diversity.  Yet the overall theme remains the same: resurrections of a “lost Japan.”

The track titles refer to entertainers, courtesans, and working class women, finding shame in servitude and pride in perseverance.  But the glittering seas appear on the outskirts, the natural beauty that surrounds the island nation defying any ugliness that lies within.  Meitei chooses to focus on the beauty. 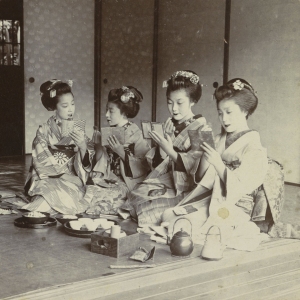 The static and warped piano that open the album offer hints of a bygone era, but the loops of the subsequent piece could only stem from the modern age.  By the third track, listeners are invited to the dance floor, a pleasant surprise.  The most overt piece ~ perhaps even the most overt of the young artist’s career ~ is “Sadayakko,” built around a repeated sampling of the words, “Japanese people.”  In timbre and execution, it recalls DJ Wally’s trip-hop track “Space People” from 1987, although it’s likely the artists have never heard of each other.  The title refers to a 19th century geisha who became an actress and dancer and was one of the most celebrated entertainers of her age.  If Meitei were not Japanese, we might question the use of the sample as novelty, but in his hands it becomes national pride ~ the exact same trajectory followed by the geisha turned actress.

“Shōnen” (which may mean “boy,” “manga” or a combination of the two), includes a spoken sample that seems to say, “some night.”  In tone, the track recalls DJ Shadow’s quintessential “Midnight in a Perfect World,” with a Japanese twist.  The album’s longest track is also one of its finest.

While we’ve categorized the album as electronic, and many of the tracks invite dancing, Kofū is more mixtape than club set.  Texture is important throughout, with piano and static frequent companions.  The impression is of a swath of history painted with a new set of brushes.  “Oiran I and II” represent the primary colors, while the secondary and tertiary colors are highlighted on other tracks.  Perhaps even more important is the manner in which the three albums compliment each other, approaching history from different angles: folklore, memory and reassessment.  We’d love to see a boxed set of all three, although this might be difficult as they all appear on different labels (Evening Chants, Metron and now Kitchen).  Whatever follows, we hope that Meitei will continue to excavate the musical and historical past; each release leaves us wanting more.  (Richard Allen)