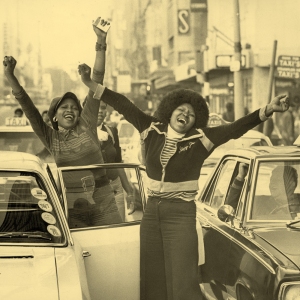 Black Lives Matter.  While this statement has always been true, in recent history it has reached the public consciousness at certain juncture points: the 60s and today in the United States, and 1976 in South Africa. UPRIZE! is a film about the tipping point of apartheid, and is now an astonishing score from South African collective SPAZA.  By interweaving snippets of the film with their own ebullient instrumentation, the collective has produced an instant classic that should resonate with fans of Matana Roberts’ coin coin project.

Just look at that cover.  That’s the look of freedom, although it took a long time to get there, a lot of pain and suffering, protest and beat-down, perseverance and hope.  “They were putting our minds in a box,” declares the narrator of the opening pieces as SPAZA sings and trills behind her.  The history is harrowing.  While there is a happy event (the end of apartheid), there is not yet a happy ending, in South Africa or in the U.S. ~ the struggle is ongoing.  This sense of yearning permeates “Sizwile” (Zulu for “We have heard”).  The tone recalls the hidden code of old spirituals.

“There was a sense of fear, but there was also a sense of excitement.”  This statement might also be applied to the current Black Lives Matter movement.  Modern parallels are inescapable: the misuse of federal troops, peaceful protests turned violent by police.  In “Bayasiphazamisa,” organizers express gleeful surprise that a raised fist and the words “Black Power” might be met with echoes eventually heard the world around.  To provide perspective, it would be eight years before The Specials released “Free Nelson Mandela” and another before “Sun City.”  In the decade after the June 16 protests, the  student-led movement ~ stripped of many of its early leaders ~ was on its own.

SPAZA’s score was recorded in Johannesburg, the belly of the beast.  Their percussive yet oft-tender improvisations meld like minds joined to a single cause.  Whether through spoken word snippet or wordless wail, the collective conveys the emotions of a people denied rights in their own country, commanded to speak the language of their oppressors.

Over the past four years, the American president has demonized Somali refugees and Somalians as a whole, calling African nations “shithole countries.”  He has declined to condemn white supremacy.  Last week, he told a nearly all-white crowd that they had “good genes,” referencing “the racehorse theory.”  The sadness of UPRIZE! is that it documents a time frame that should exist only in the past, yet stretches its racism and xenophobia to the present day.  UPRIZE! is essential listening, not only because those who fail to learn from history are doomed to repeat it, but because it represents the possibility of a hard-won victory, something that can seem unreachable to those who have been fighting for so long.  (Richard Allen)