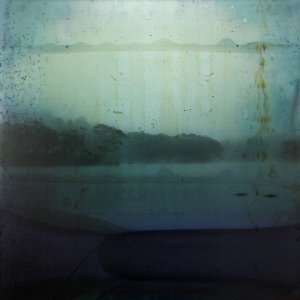 The term “home orchestra” is well chosen, as over two dozen instruments are played by these two Australians over the course of the album.  Each track yields its own tone and conjures its own associations, but the whole holds together surprisingly well.  Lost Tribe Sound’s hardback book package is another bonus, lending the release an air of the pristine.

One imagines the performers in a large living room, their instruments scattered about.  “What shall we use on this one?” asks Claire.  “Perhaps the wulf fidel?” suggests Tony.  “After all, it’s October.  When the low tones of “from a rooftop” burst into percussive glee, the playful patina suggests Origamibiro, as accurately referenced by the label.  Deak and Dupé run around the room, hitting things, before returning to center.

If “from a rooftop” is the playground, “overland” is the western novel.  This is less of a left turn than one might think; it’s more like a segue, a mother breaking out the novel while her child plays.  A horse, bearing a handsome man, gallops past the swingset.  The man has given up Marlboros and is now on a vegan diet.  He’s also an environmentalist.  On his way home, he encounters “the rain.” He’s thinking of the mom, the mom is thinking of the child, the child is thinking of the playground.  See how this works?  The sound is low and slow, the droplets hoping to fall “before dark” so they can evaporate quickly and return to the sky; those that do, friends all, begin to dance.

Further variety is found within the tracks.  The aforementioned “the rain” begins in a prance, with taps on a triangle, but slows to let the strings in.  (They don’t like to get wet.)  Mid-piece, the track comes to a near-halt, because everybody knows the bass clarinet likes everyone to pay full attention to him.  The clarinet is jealous because the piano comes in so quickly, stealing his thunder.  Speaking of which, are those sleigh bells?  Now everything stops save the piano and a few lightly plucked strings.  Now just the strings.  And now the next song, low and slow once again.

The loping “procession” draws the album to a close.  One thinks of a toddler, sadly putting her toys away at the end of the night.  She’s wistful without knowing the word.  When she raises the flute, she remembers that she still has tomorrow.  She blows into it as if to make tomorrow come true.  Tonight she’ll dream that her friend will visit again, and together they’ll cover the floor with music.
(Richard Allen)