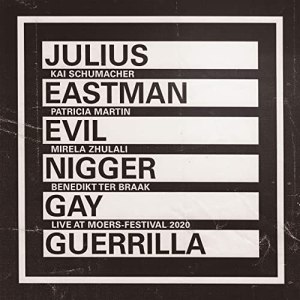 For the past couple decades, the figure of Julius Eastman has been fruitfully revisited by interpreters, composers, scholars, and media, producing important reconsiderations of 1970s-1980s US avant-garde history. Their points are now relatively well-known, and the composer is the epicenter of exciting developments in the disarticulation of the canon of minimalism.

Thankfully, interpretations and recordings of his works are starting to become more common after a dearth of material ever since the release of Unjust Malaise in 2005, with an increasingly steady stream of versions of various pieces – which I hope keeps up – coming out since 2016’s stellar Femenine, under the Frozen Reeds label. Interestingly enough, the two pieces that have been the subject of most new releases (whether as reissues or new interpretations) are among his most explicitly militant: “Evil N—–” and “Gay Guerrilla”. While there’s no doubt that most of his currently known oeuvre is permeated by vanguard dissolution of the aesthetics/politics divide, only three works within it (these two and “Crazy N—–”) are immediately abrasive ever from the titles, tied to contexts in which wielding certain identities was both an act of disruption and re-signifying appropriation. As he stated in a recording contained in Unjust Malaise addressed to an audience in Northwestern University in 1980, the names were meant to elicit a “basicness” that “eschews that thing which is superficial”. In other words, they could be conceived of as a reference to the raw and complex quality of everyday life, as opposed to the abstract intent of a minimalism continually concerned with “big” and “Human” (yes, with capital H) events. Where canonical US minimalists promote coalition around “universal rhythms” (Americanized and taken from African peoples without retribution), Eastman incisively foregrounds difference, a productive and combative distinction that points at the basic intensity of living in a world that tries to suffocate the plurality continually exploding within it.

The four performers of this album, Kai Schumacher, Patricia Martin, Mirela Zhulali, and Benedikt Ter Braak, (from now on shortened to KPMB) have made a wonderful effort to capture precisely this intensity. Other recent versions of “Evil N—–”, like that of the excellent Kukuruz Quartet, emphasize its maximalist qualities, a grand Romantic storm brewing within a restrained format. Instead, KPMB foreground the precisely crafted interactions between pianos not as powerful, almost violent explosions, but as clearly interweaving voices that intermittently raise or lower their tone. That does not mean the piece’s edge is made blunt – on the contrary, it is sharper than ever, its abrasiveness no longer rooted upon impending emotional release but its other, an aggressive restraint that feels even more threatening, planned, almost cold. The organic quality that Eastman spoke of, in which the music grows additively but also sometimes subtracts elements without shifting its core identity, is made evident in KPMB’s interpretation, developing like a 4-way open dialogue rather than a 4-instrument narrative totality. In their hands, that quality of Eastman’s music that prizes unexpectedness and improvisation rings true; one of the issues with maximalist versions is that they seem to lead towards release, and in the end they do. KPMB, who were recorded live at the Moers Festival 2020, proceed through “Evil N—–” as if it was underlined by a process of inhalation and exhalation, like a cycle in which release is not the endpoint, but just one more element of composition.

“Gay Guerrilla” is very similar in that regard. For instance, the Northwestern University version is relentless, much like the Unchained 2014 interpretation by Joanna Duda, the Lutosławski Piano Duo, and Mischa Kozłowski, who really seem to be waging a low-intensity sonic war with the piece. Kukuruz’s is, in contrast, explosive and powerfully emotive, much more of a Romantic affair. KPMB’s differs quite starkly from their predecessors, highlighting the meditative strength of the main riffs, slowing down the pace not for the benefit of an ultimate release but in order to make the piece’s growth more heavy-hitting, all of its elements quietly adding up into a towering and imposing harmonic construct by the 20-minute mark. This is precisely where Eastman’s variation of the melody of “A Mighty Fortress is Our God”, called the “battle hymn of the Reformation”, comes marching right in, turning the music towards an impressive, unexpected martial flow. The prophetic and practically mystical associations that the hymn might play here is best left to experts to explore, particularly, perhaps, when contrasted with the Judaeo-Christian links of other US minimalist works both from Eastman’s time and ours, like John Adams’ “Christian Zeal and Activity” and “Hallelujah Junction”, Steve Reich’s “Tehillim”, Nico Muhly’s “A Good Understanding” and “I Drink the Air Before Me”, among others. Suffice to say, KPMB softly let the march diminish, its consequence not an all-out war but an integration into shimmering, introspective piano conversations. There is no defusing the guerrilla, its confrontational spirit simply transitioning towards an inner, quiet discipline of militance that does not simply aim to float freely beyond the world, as John Cage would have it, but to break its silent iron grip with a faith to rival its most powerful oppressions. “Guerrilla”, Eastman says in the Unjust Malaise recording, “is someone who is […] sacrificing his life for a point of view and […] if it is a great cause, those who belong […] will sacrifice their blood, because without blood there is no cause.”

In the end, the more Eastman works there are out there, the better, since it is through players like those mentioned above that we will at last have the privilege of listening to the many nuances and possibilities of his compositions. KPMB’s contribution to this history will hopefully not go unnoticed, aiding in the proliferation of the composer’s presence. I also hope it will not be followed by canonization, that Eastman as a tragic figure will continue to be inexhaustible source of tensions and confrontations with the smooth history of minimalism in the US. In the meantime, you can be certain that we are living in the midst of an exciting period of revision and rediscovery, and that these compositions are now perhaps at the beginning of brand new lives of their own. (David Murrieta Flores)