All Together Now ~ The AMPLIFY Encore

During the pandemic, most festivals either retreated or closed.  AMPLIFY 2020 went in the opposite direction.  We blinked and 50 more tracks, EPs and albums came out, including the best of the bunch!  For six months, the repurposed online festival has been a smorgasbord for drone, field recordings and experimental music.  After 240 releases, the festival offers an encore in the form of an hour-long mix (to the second!) including a piece of every track featured in the festival.  We’ll get to that in a bit, but first we’d like to highlight three short works which serve as a summary of the past six months.

Geoff Gersh‘s soundscape NYCIND is comprised of sounds recorded during COVID-19: a mix of sounds missed, sounds recovered, and sounds unique to the year.  We’ve grown so accustomed to writing on the quietude of lockdown that we’ve missed the fact that reopening sounds different as well.  Early in the mix a cheerful public service announcement requires social distancing.  Children chatter with their parents; waves crash against a shore; a ball meets a racquet; ethnic singing echoes in open spaces.  A lone violin plays an elegy.  And of course there is traffic, lots of traffic, along with sirens, a monologue from a homeless man, the cry of gulls, the ringing of bells.  New York is not out of it yet; after months of pandemic lull, new outbreaks have begun to cause new shutdowns.  Gersch helps listeners to remember everything they like about the city (and a few things they don’t), but also reminds us of the precarious nature of soundscapes in a crisis year.

Kate Carr‘s For some odd reason continues her streak of relevant, compelling releases in 2020.  This short piece is an ode to the comfort of background noise.  Numerous narrators read comments from YouTube while source noises play behind them: streetscapes, bar chatter, football chants and even sirens.  The narrators acknowledge that some of their choices seem odd; one comments, “I use these voices to drown out the ones in my head.”  Many remember childhood comforts, and express fear – or love – of silence.  Carr was inspired by the revived practice of piped-in crowd noise at sporting events; says one commenter, “it really helped.”  Yet to this reviewer, the practice produces an odd distraction, a disconnect between sound and image.  Extroverts may prefer falling asleep to the sound of voices, while introverts find such achievements impossible.  Carr provides room for both.

The final piece of Erstwhile Records’ AMPLIFY 2020 Festival comes from Maria Chavez, who has been working with applause sounds for eight years; The Rain of Applause is the seventh entry in an ongoing series.  This one incorporates applause from “Black Lives Matter marches, vigils and other events,” and highlights the hope of social change.  The recording is particularly important as the political right has sought to highlight the opposite, focusing on the relatively minor (and not at all widespread) issue of property damage.  Chavez captures the energy, vitality, youth and unity of this worldwide movement, proclaiming its positivity through the meeting of palms.  The topic is personal for the artist, who was once unjustly prisoned in Houston; the time of the soundscape (8:46) is a direct reference to George Floyd’s murder.  The cheer of bicycle bells and car toots (as opposed to long honks) is evidence of empathy in a damaged time. 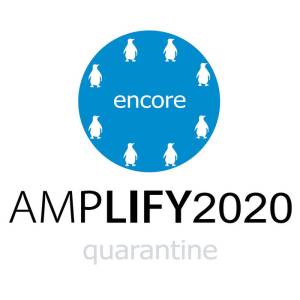 And now to the encore: an overdub of every piece presented in the AMPLIFY 2020 Festival, which means something like a thousand sources in one hour.  Taku Unami starts with small sounds: low drones, percussive taps, small nature recordings.  Some sounds reverberate longer than others.  As more are added, one starts to get the feel of a live festival: the more one walks around, the more the simultaneous concerts begin to blend together, pouring over each other like scents from an outdoor food market.

After a quarter-hour, one begins to receive the overdubs as a cloud: perhaps that of COVID, perhaps of anxiety.  One must remember to just breathe.  By the half-hour mark, the effect has become claustrophobic. The air is thick, the sonics dense.  Everyone seems to be playing at once.  Construction equipment adds to the chaos.  The irony is that such sonic density is the opposite of what we experienced during lockdown.  Such cacophony reminds us instead of the importance of sonic space.  As cities return to former levels of activity, some residences report a wistful nostalgia for the soft, socially distant summer of 2020.  In the final fifteen minutes, the loudest noises recede, and music is heard once more.  The title leaves a lasting dual impression: we are all together now.  In response, we can make noise, drowning each other out, or lean into harmony.  (Richard Allen)