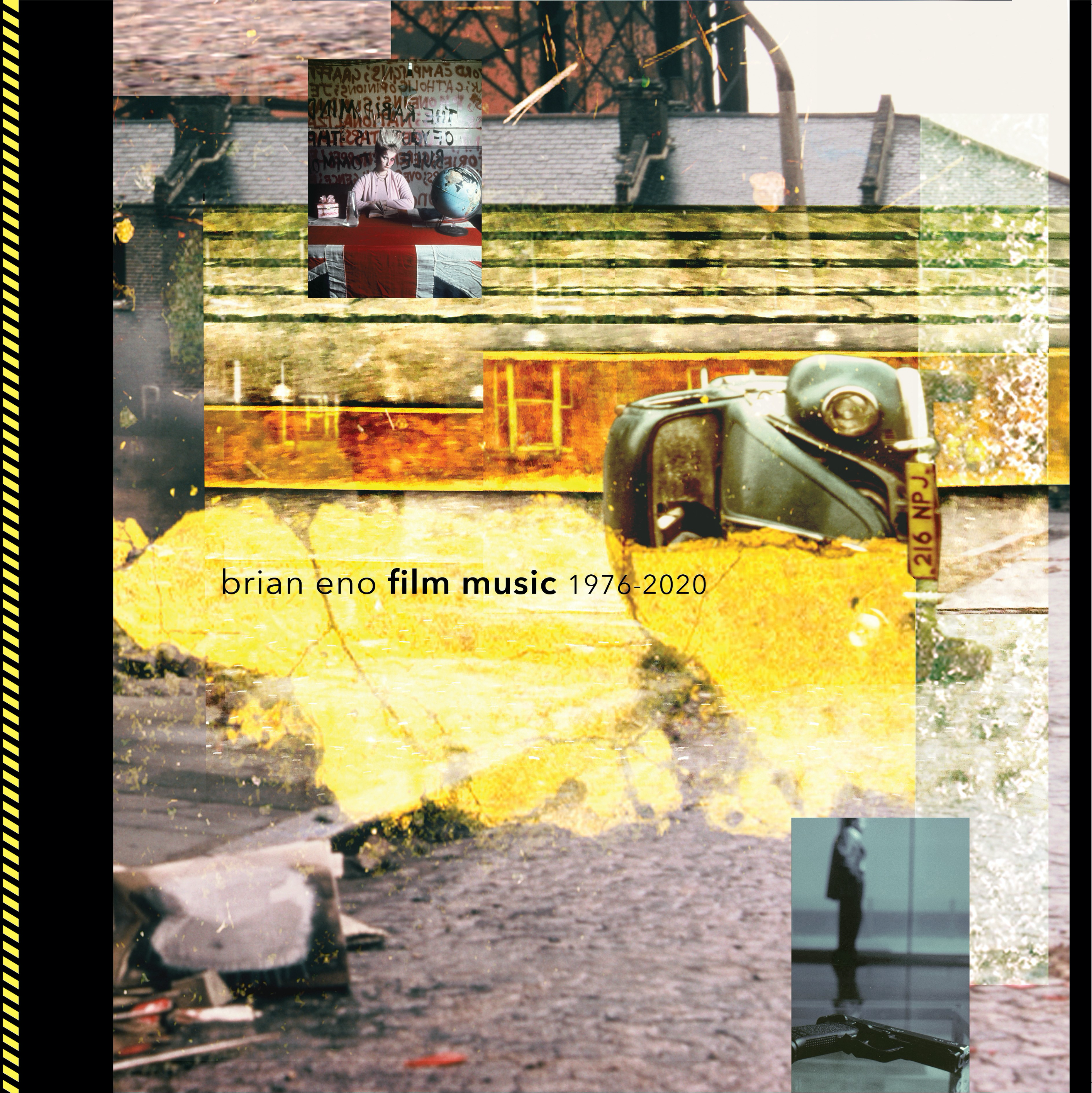 Two scenes from an A&R office.

Umm: So we’ve just heard, Brian wants us to release his next album, Music For Films.

Err: Great! But hasn’t he already released an album called that?

Err: There aren’t many track names that I recognise from the first version. Aren’t people going to get confused?

Umm: Well, possibly. We’re taking out two-thirds of the tracks, or thereabouts, and putting some new pieces in. But he likes the title so we’re going for it.

Err: I assume the artwork will be different?

Umm: No, we’re keeping the artwork. Just changing most of the music and some of the titles. Perfectly normal.

Err: What are we doing with all the tracks that are coming off the first one?

Umm: Oh, we’ll probably pop them on a new album in the future. A Music For Films II, perhaps.

Err: Or More Music For Films?

Umm: Exactly! Waste not, want not!

Hmm: So we’ve just heard, Brian wants us to release his next album.

Hmm: Well, we’re looking at something like Music For Films, that title has done well in the past.

Ahh: So it’s a new Music For Films album then?

Hmm: Ah, no. You may be aware that very few tracks from Music For Films actually ended up in films.

Ahh: I think “Final Sunset” did.

Hmm: Well remembered. No, this time it is music that has been used in films. And TV, come to think of it. It’s a greatest hits compilation, without any actual hits.

Ahh: So… we can just use Music From Films?

Hmm: You’ve been listening to Aphex Twin again haven’t you? But I like the dates. Gives it gravitas.

Hmm: We should try to avoid calling it ‘Music For Films’. It might confuse people.

Ahh: How about Film Music?

Hmm: Great! Stick the dates on the end, we’ve got a winner!

It’s probably a good job the pubs are currently shut in the UK, otherwise there would no doubt be lengthy discussions over pints of golden ale regarding the naming and content of Film Music 1976 – 2020. If nothing else, it points to the reduction of single artist compilations doing the rounds in the age of streaming; where there used to be a handy ‘greatest hits’ CD designed for Christmas morning, there are now multiple streaming playlists all covering similar but slightly different ground and record companies are having to come up with new expanded editions of old albums to keep the cash rolling in.

Brian Eno is an artist who has always been resistant to the straight forward compilation, aside from the multi-format collection of More Blank Than Frank (on vinyl) / Desert Island Selection (on CD) that offered a decent appraisal of his four vocal albums of the 1970s. He has tended to go big in the past, adopting the box set approach to anthologising his work – from Working Backwards 1983 – 1973 (10 LPs), the Vocal / Instrumental boxes (3 CDs apiece) to the 6 CD Music For Installations of 2018. Hey, if you’re going to compile Eno, might as well be thorough, right?

So it’s somewhat odd to find Film Music occupying just the one disc – or double vinyl for you gatefold fans – when there was certainly the possibility to include the full soundtrack to The Lovely Bones, or Glitterbug (which was re-worked by Jah Wobble as Spinner) on a multi-disc set. Or Neverwhere, if we’re dipping into TV. Or, indeed, Rams, which appeared as a vinyl-only release for Record Store Day this year. So, as improbable as it seems, it is more likely that Film Music was designed as an accessible entry point for movie-goers and casual fans rather than die-hard Eno watchers.

Certainly, if you’re a Danny Boyle fan two of the tracks will be immediately recognisable, with two tracks lifted from Apollo: Atmospheres and Soundtracks – “Deep Blue Day” was used as the memorable cue when Ewan McGregor took a deep dive in a toilet in Trainspotting and the closing “An Ending (Ascent)” appeared in 28 Days Later, although curiously here it’s credited to For All Mankind, for which it was originally composed rather than any of its later uses.

Threads can be drawn out from Film Music although they aren’t resolved in situ – you have to go looking for them. There are two tracks from Danny Boyle films, but he also directed the TV series Mr Wroe’s Virgins for which the brothers Eno provided the award-winning soundtrack. Derek Jarman picked “Final Sunset” from the 1976 Music For Films for his film Jubilee – pretty much the only person to use one of the tracks as it was originally purposed – and consequently, Eno recorded the ghostly “Dover Beach” (included here) for Sebastiane a couple of years later as well as soundtracking Jarman’s final film Glitterbug. The title track of Another Green World also appeared on the first Music For Films and was used for the opening titles of the BBC TV arts series Arena thus making the music indelibly linked, for a generation, with a neon logo in a bottle bobbing on the water. As if to square the circle, Eno provided music for the Arena programme on Francis Bacon – “Blood Red” is one of seven previously unreleased tracks included on Film Music.

Film Music avoids chronological sequencing and instead goes for a sympathetic track order, which places four of the unreleased tracks in the first quarter. Although pulled from Top Boy and The Lovely Bones, among others, these pieces don’t really land – it takes the appearance of “Under”, one of the few vocal tracks here, to pull the album into focus. “Under” was originally recorded for Cool World, and has popped up on a variety of Eno albums since; propelled by a distinct bass line it is one of his best post-70s works with a bit of structure and substance that some of his more recent works don’t have – it’s what elevates “Last Night In Jersey” from Heat above most of the more recent work which I suspect would be dismissed as floaty and directionless if it was composed by someone with less cache than Eno.

This isn’t to dismiss the later period work on Film Music but it’s possible to argue that for a period either side of the century (roughly, between Spinner and Another Day On Earth), there was a dip in Eno’s musical work. His development of ‘generative music’ and his ventures deeper into the art world through installations, plus the other opportunities that were presented at this time (the lectures, the perfume, the Windows 95 start-up sound, writing a diary, producing Coldplay….) meant that his own music plateaued somewhat – it’s noticeable if one arranges Film Music chronologically that there is a sizeable break (between 1995 and 2009) and the two works here made during that period depend on the bells and chimes that were Eno’s go-to sounds at this point.

Thankfully, Eno’s other track from Top Boy (“The Sombre”) and his most recent inclusions “Reasonable Question” (from 2020’s We Are As Gods) and “Design As Reduction” (from 2018’s Rams) are certainly inspired works, full of imagination and atmosphere, not least because in the latter two cases, he is prepared to anchor the pieces with a little bit of percussion rather than leaving the tones to drift away. These tracks, along with the albums of the same period (for example, The Ship, and this year’s Mixing Colours with Roger Eno) show Eno shaking off the generative music sounds and becoming freshly invigorated.

There are gems here that will appeal to old fan and neophyte alike: “Prophecy Theme”, Eno’s sole contribution to David Lynch’s Dune, on a soundtrack otherwise composed by the band Toto, is a miniature marvel, all shimmering peaks and crystalline tones, one of Eno’s very best ‘one-off’ works. By way of contrast, “You Don’t Miss Your Water”, a version of an old William Bell soul tune which has also been covered by The Byrds and Otis Redding, and recorded for Married To The Mob is an opportunity for Eno to break out a choir of Brians and doff the cap to his love of doo-wop. With Daniel Lanois on guitar, it’s a surprisingly touching moment, full of space and echo, where the reverb sounds natural rather than computer-generated; there have been precious few comparable moments since, up until Eno’s cover of “I’m Set Free” on The Ship.

As a compilation, Film Music is a bit of a mish-mash. For the casual fans, there’s probably a couple too many interchangeable and vague ambient pieces whilst for the hardcore fans there’s an abundance of album tracks they will already own – as good as “Under” is, it has already appeared on Another Day On Earth and My Squelchy Life – as well as the mystery of including “Beach Sequence” from the Eno/U2 collaboration Passengers. By including two tracks from Top Boy and TV documentaries Arena and Natural World, Film Music doesn’t even stick to the premise of its title; as alluded to at top of the page, working out how to position this album must have provoked a few headaches. As someone who discovered Eno through film (“Sky Saw” in the film Dogs In Space was the moment it clicked), I applaud the concept behind Film Music 1976 – 2020 but it does feel like an opportunity missed. (Jeremy Bye)