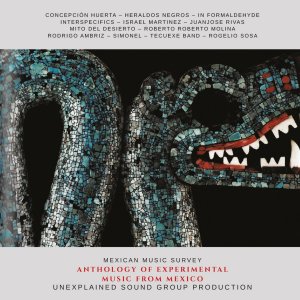 There is a certain narrative emerging from the excellent Anthologies being curated by Unexplained Sounds Group, in which the world outside the so-called global north is a place full of traditions and interactions beyond the commonalities in a genre like experimental music, whose definition is, however useful to us writers, vague and loose. The places where those commonalities are most prominent – say, a disruption of tonality, or an exploratory take on sound phenomena – become representative of a “globalized” or “universal” setting, whereas those places in which musicians veer slightly off-course become interesting*. These rationalist/romantic categories have been at the core of discussions related to modernism for a couple centuries now, and one of the shapes it is expressed through is a conceptual tension between “progress and tradition”, as the liner notes to this Anthology put it. They describe Mexico as such a place, divided between two supposedly incompatible poles, reaffirming the above narrative in which European romantics found themselves as living in a “no-place”, developing and wielding aesthetic exoticism and orientalism (appropriations of others) in order to attack the homogeneity of rationalist discourse that found in Europe the source of all things generic, the superior representative of universality in all domains of human life.

After all, it is not like experimental music emerged truly in the vacuum of a time ahead of our own – if we criticize the grand stories that mid-20th-century avant-gardists told about themselves, it is possible to see that there are many continuities between the fixations of late romantics and their own. The line between Charles Ives and John Cage does not reveal an abandonment of the old, but its reformulation for the purposes of the new, an intricate relationship that situates even the most strident of experimentalists within sets of traditions. What was newer in 1968 US than Wendy Carlos’ Switched-On Bach? What would’ve Milton Babbitt done without Schoenberg, and would’ve Schoenberg done without Wagner, and so on and so forth? To identify the traditions of European music means making it as interesting as any other set of traditions; it is a necessary abandonment of universal positions that hide the hearts of empires and pretend they are the norm, that they alone are generic, that tradition is something that exists elsewhere, where modernity has not yet arrived.

In all fairness, this relationship is complicated by the romanticized opposition of excolonies around the world, espousing national cultures and distinct narratives against the rule of peoples that pretended to embody the correct course of the history of the world, imposing their own systems everywhere. Their opposition is thus grounded upon wide international movements and networks that also include the empires they stood against. In other words (from the history of musics), the line between Julián Carrillo, who developed an entire microtonal system since around 1922, called “the 13th sound theory”, and Carlos Jiménez Mubarak, who pioneered new experimental compositional methods in late 1950s Mexico, is one that connects local, regional, and international histories alike. Mexico’s 20th-century nationalism was also a work of the avant-garde (think Diego Rivera, Frida Kahlo, etc.), and its anti-colonial, anti-imperialist configuration became reflected in a formula that simply reversed the tensions between universal/particular: what is particular to Mexican art, in short, is also what makes it universal.

New and more current approaches to this centuries-old problem have emerged among decolonial and postcolonial thinkers everywhere. In any case, still using the “master’s terms”, doing away with the tradition vs progress dichotomy means recognizing that the conception of progress is by now a traditional impulse on its own, and that tradition is not the unchanging burden of the past; it also means recognizing that, simply put, there is no universal, and that no cultural articulation determines it, however powerful it might be. The Anthology begins with Rogelio Sosa’s “La noche del nahual”, which not only contains a Náhuatl word but also aural references to a pre-Hispanic sonic world of which we keep, with many difficulties, reconstructions of a few loose puzzle pieces. These references are not evident to whoever has listened to both serious and kitschy interpretations of what Meso-American music sounded like; they are the synthetic result of thinking electronic music through a sound-image of the regional past. The very second track reverses this understanding, thus being much more evident in its Meso-American grounding. “Acahual with the chia” by Tecuexe Band deploys steady percussions and rhythms of the kind we imagine Meso-Americans with, accompanied by a few electronic modifications. Also, instead of a name that mixes Spanish and Náhuatl like the first track, it mixes Náhuatl and English. This is the way the Anthology presents itself, through an image (both literal, in the cover, and aural) of Mexico’s pre-Hispanic past first and foremost, mixed directly with current musical languages rooted in a much wider, common past. But my point is this: pre-Hispanic musical traditions are also a modernist innovation, and while cultural nationalism made its own attempts to reconstruct them (think of Silvestre Revueltas’ “La noche de los mayas”, from 1939), it would be the para-academic environment of experimental musicians that followed what would give those traditions their actual form.

While important, this connection to the country’s past was not exactly the main drive for new musicians developing electroacoustics and experimentalism since the 1960s, and it corresponds well with the way in which the Anthology simply follows another route after these first two tracks. It would be unproductive to project that same “national” narrative to these works, trying to find what is essential of Mexican experimental music; rather, what stands out from many of these pieces of sound art is their willingness to simultaneously play with and attack the stability of musical categories. Peppered with Dadaist title tracks, the Anthology shifts quickly between drones, near-noise performances, soundscapes, and more formalized electroacoustic sections. They never straightforwardly dive into the unknown – even more exploratory tracks like Heraldos Negros’ “Amydrós” (a Greek word meaning “twilight”) or Rodrigo Ambriz’s long-form collage “Et voici la fièvre” (French for “and now, the fever”) keep a certain degree of accessibility, a readiness to be heard. They might become impenetrable walls of noise or leave us hanging in an ambient void, but they always come back to greet the listener with quieter sections, with relatively recognizable sounds, with tones that quiet the body. Even Concepción Huerta’s stridently-named “INVASIÓN”, while growling with sharp drones and rendering the soundscape bare with noise-bombardment, comes to turn its relentlessness into a meditative state ending with simple silence. Her approach transforms the assault on our ears into a space of thought, the terror of a hurricane passing internalized into new ways of perceiving ourselves. The willingness to make experimentalism a process that conceivably anyone could play with, even find peace through, is what makes this Anthology so powerful. It is serious, yes, but never solemn, regardless of the whiff of mysticism attached to the way it presents itself, and the artists featured sincerely introduce us to new possibilities in sound organization. Forget progress and tradition – this great Anthology belongs squarely to the here and now, like any other kind of experimental music, and it is driven by a multiplicity of histories that handily burst the bubble of the nation, the region, and so on.

One final critical note is that, given the current context not only of Mexico but many other parts of the world, the Anthology lacks the presence of women. As in many histories of experimental music, it is not that they are simply not there – whether it’s Johanna Beyer in the US, Alicia Urreta in Mexico, or Else Marie Pade in Denmark, authors tend to obscure their stature by giving more prominence to male peers. An opportunity was lost here, in the sense that women in music everywhere have made their voices proliferate further than ever through digital means, and in Mexico they have done so against all odds, against a society that continually murders them. Recent compilations by Sisters Triangla Records (with the descriptively titled Feminoise México) and the collective called Híbridas y Quimeras (with the combatively titled Compilame’sta) have torn down the gates of music genres usually associated with men. So, however great the selections (Concepción Huerta, Leslie García, Sunnesther), it is a pity that only 3 women appear in an Anthology featuring 16 artists in total. Both of those compilations have a fruitfully oppositional stance, breaching the limits of experimental music as a wide genre whose tradition is revealed to be firmly rooted upon a set of male referents: in a sense, they are not afraid of music that does not sound what you’d expect experimental music to sound like, but that certainly is. While the Anthology decisively develops a view of the present, it would have benefited from much more of Mexican women’s noisy struggle to let the future be born, to draw the horizon of a new music beyond the tired old history of “great” men.

That said, the Anthology is nevertheless an exciting proposition, a platform for connections between artists from Mexico and beyond, compiled by one of the most forward-thinking labels in our musical milieu. I certainly hope that Unexplained Sounds continues with such a consistent rate of excellence, documenting practices from all over the world with such profound care. Here’s to many more anthologies!

* It is important to remember here that interesting as an aesthetic category emerged in the late 18th century among romantics seeking to focus the particular over the universal.