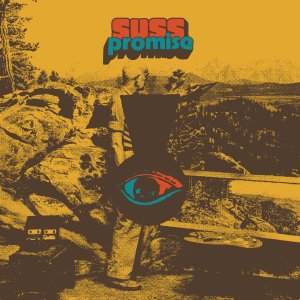 SUSS are a big city band for the lone ranger. They write music for warm car rides through the blistering American west with a self-proclaimed “Eno meets Ennio” approach that splits hairs between psychedelic wanderlust and escapist contemplation. Their third record, Promise, is a sun-soaked country opus that finds the quartet chiseling away the rough corners of spacious pedal steel to an ascetic degree.

Based out of New York, the members of SUSS have all spent decades in various corners of the art rock scene, always returning to an Americana palette of the other half of the country. What might feel like the same romanticized traveler narrative of O’Keeffe and Kerouac is crystallized on Promise as a lofty sonic ideology of uplifting expansiveness. Like many New Yorkers before them, SUSS have taken an outsider language and defamiliarized it into a place and sound that only exists within itself. The slow moving guitars, harmonicas, and synthesizers all evoke wide open mountain ranges and deserts, yet they also contain a powerful level of interiority. The landscape is a muse for sounds of hopefulness and light.

Most of the tracks here function identically with repeated chord motifs and delicately rising swells over five-minute runtimes. In turn, Promise works as a hymnal of sorts, where momentum is found in expected repetition instead of ascension towards something new. Opener “Midnight” appropriately overtures the sound collage with instrument entrances that add to the cinematic nature of the project. “Drift” develops the psychedelia with fuzzy guitar drones over a starry acoustic fingerpick, but the album hits its stride with “Home,” an elegiac theme for a record about thoughtful optimism. Each time the central shoegaze guitar riff comes in, it welcomes you back like an old, comforting friend.

Promise was entirely written and recorded during quarantine, and the band has framed it as an attempt to find a sense of beauty and uplift in difficult times. Their ambient country is certainly an appropriate conduit for hopeful escapism, so there is an easy-listening aspect to the glowing strums of “Winter Light” and the major-key exit music of “Nightlight”. However, there is a more potent undercurrent of radical joy in the pensive wastelands that the band creates in their longing for better times.

The strongest moments on the record all stem from cyclical riffs that break up the mesmerizing open space. This is undoubtedly ambient music for half-attentive experiences, but the quick melodic motifs hold so much gravity in their ability to draw the listener deeper into reflection. Promise is effective as happy, insightful music for this calming well of expectation in between the lulling, nebulous drone. It is a record full of comforting surprise and gratifying results, and for that, it fulfills its namesake as a much needed moment of clarity as this year comes to a close. (Josh Hughes)