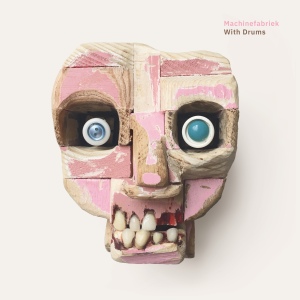 In prior years, we’ve described Rutger Zuydervelt (Machinefabriek) as prolific, creative, visionary, and a host of other terms ~ but this is the first time we’ve described one of his releases as fun.  When label and artist proclaimed that With Drums “doesn’t sound like any other Machinefabriek album,” we were skeptical; how could this be, after hundreds of releases?  Turns out they were right.  We suspect the pandemic may have had something to do with the stretching of boundaries, but this album is a blast.

It all started with an email.  Zuydervelt invited a multitude of drummers to submit “a few short fills or phrases,” recorded however they wanted.  42 of them responded, which would make one think this would become a pretty long album.  Instead, it’s remarkably concise, 24 tracks in 37 minutes, each piece combining the talents of three drummers, with post-production by Machinefabriek.  The end result is what one might imagine if an extensive drum kit were set up on a festival stage and each of the festival’s drummers stopped by for about minute before passing the sticks to the next person.  But there’s a caveat: it seems that each drummer tries to make the most of their limited time, contributing a unique or challenging fill or phrase.  In other words, With Drums is a celebration of percussion in its various guises, a primer on what is possible. It’s the most one can imagine in the smallest space, an album of fascinating nooks and crannies.

Without a guiding hand, this project might have been a bowl of spaghetti; but Zuydervelt tidies up the lot, making the album flow as a whole ~ a feat whose difficulty cannot be overstated.  He had to choose sequencing not only between tracks, but within tracks, and determine how much he could add without tipping the listener to his presence.  Some tracks receive electronics, others strings.  In deference to the title, a few contain percussion that is not drums: chimes and other struck objects.

If there is a comparison to be made, it might be to Virgin Babylon’s One Minute Older, which spun through a wealth of artists in an extraordinarily brief amount of time.  Blink and one might miss a favorite sound or misidentify the source.  The initial round of enjoyment is the hearing, followed by a second round of identification: oh, there’s Tony Buck!  There’s Jon Mueller, Thor Harris, Cyril Bondi, Karen Willems!  As one listens and reads, one starts to separate the distinct personalities, and becomes amazed at the maestro playing match-up, creating compositions out of fragments, and tercets out of individual contributions.

After hearing the puzzle assembled in such a fashion, one has difficulty imagining it any other way, although it’s clear the possibilities are myriad.  Might there be a sequel or a series of sequels?  We are already imagining the experiment continuing with brass or strings or woodwinds.  Or perhaps Zuydervelt will continue to innovate, never content to rest on his laurels, pushing sound forward, or sideways, or wiggling it around until it morphs into the beautiful other.  (Richard Allen)