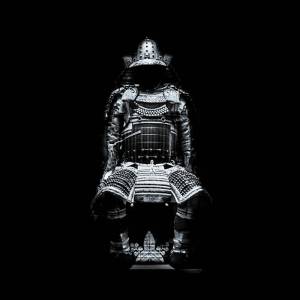 With Spotlight Series: Cello, Matt Emery embarks on a new series of recordings, each focused on a single instrument.  The theme of a samurai warrior headed into battle is echoed by the composer, albeit with a smaller risk of blood, dismemberment or death.

While the cover portrays the armor of such a warrior, the opening video portrays a different sort of battle: one against “Anxiety Mist,” physically demonstrated in the opening moments.  Fifteen cello lines emerge from cover like a group of soldiers forming their battle line.  The pace and pitch rise like pulses in anticipation of what is to come.  Jumping the gun, the center already sounds like warfare.  In contrast, the scenes begin placidly in the snow-draped mountains, shifting to the desert as the cellos hit the lower register and the first glissando lands.  And then it is on to cities and fields, buildings and streams interspersed: speeding cars, a racing camera.  The implication is that the world ~ even the placid world ~ is accelerating out of control.  The brakes are cut.  Video and song seem headed less for a clash than for a crash.

The low-register attack continues on “Battle Cry.”  Fraser Bowles performs this solo live in the kitchen of Emery’s parents, producing another curious contrast, again implying that the battles we face are not as samurais but as domestic warriors.  We use the framework of historical drama to produce our own narratives.  The loops of “Raindrops and Blood Spurts” pay homage to the title. One imagines a cinematic, slow motion scene with arteries severed in a drenching downpour.

Now let’s leave the samurai aside for a moment to consider the cello.  This incredibly expressive instrument gets its due through the variety of approaches: solo, set and loops.  While listening, one will likely remark that no other instruments are needed in order to produce a full experience.  But there’s still much more to the cello than this, as the EP showcases melody, harmony and tone while touching only lightly on abstraction, abrasion and dissonance.  Such facets might be highlighted in a follow-up EP.  Emery plays to his strengths: the EP is unified in theme, peaking in “R for Rebirth” with a full stop followed by staccato strings.  The final note is one of resolution.  All as one.  (Richard Allen)