Rose Riebl ~ Do Not Move Stones 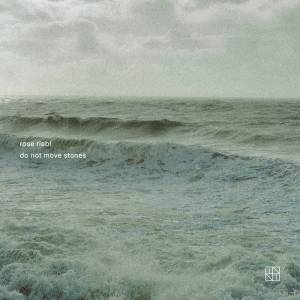 The album title is enigmatic, a reference to Greek poetess Sappho’s fragment 145.  These four words ~ do not move stones ~ have inspired multiple artists, from poet Anne Carson to experimental musician Portia Winters, who scrapes stones in the track of the same name.  Now Melbourne pianist-composer Rose Riebl enters the fray, and we’re still not sure what the fragment means.  In a literal sense, fragment 145 may plea, do not move these stones; this cairn is a storehouse of memory.  In a metaphoric sense, the fragment may suggest that some things are best left undisturbed.  In the hands of Riebl, the mood is just as important as the execution; the album sounds like the restoration of peace after a threat of disturbance.  This is never more apparent than in “An Ending, Go Back to the Beginning,” which begins with the sound of sirens before leaning into serenity.  It’s virtually impossible to ignore comparisons to the current global situation ~ especially the latest waves of lockdown in Australia following months of relative calm.  This music grows slowly and steadily into a statement of confidence.  Riebl plays louder, cellist Ceridwen McCooey paints excitedly, and until the last minute, all troubles are forgotten.

Much of the set is inspired by time spent in Iceland, especially lead single “Over Salt Sea,” which reflects the artist’s arrival in the land where I N N I is based.  The video version is even better than the album version, although only fifteen seconds longer with two more seconds of sound.  Those opening seconds ~ wind, bird, glass, sea ~ are the world’s tiniest overture, a fragment worthy of Sappho, followed by the silence of preparation.  On the other end of the track, ten seconds of perceived silence (less for canines, with better hearing) allow the piece to recede into quietude.  The effect is likely similar on vinyl, but disappears in the digital version.  Do not move silence.

And isn’t it strange to talk about a composer by mentioning the notes not played?  John Cage would understand.  Riebl relies on flurries of notes balanced by slow chords, a tug of war between the left hand and the right.  As one watches the video, one remembers that there are spaces between the clouds and waves as well.  In tracks such as “Even As the Light Fades,” such spaces are filled in, either a rage against the dying of the night or a reminder that life is to be lived even more fully because it is finite ~ perhaps the primary lesson of the last 18 months.  Even a piece as forlorn as “Forgotten Song” contains some manner of memory, its lyrical antithesis the solemn yet hopeful “Someone Will Remember Us.”

Riebl’s music operates in a fashion similar to Sappho.  Sometimes we receive only fragments of beauty and are left to fill in the rest.  Should we choose, we may scribble black clouds in the margins, distracting from the beauty, or draw eloquent arrows that point to what is preserved.  Concluding piece “Two States of Mind” underlines this choice.  If a world can be seen in a grain of sand, and a poem in a fragment, one can also find a mindset in a song.  (Richard Allen)