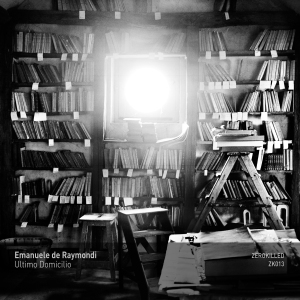 The work of Italian composer Emanuele de Raymondi lands in the juncture between drone, electronic and modern composition.  Ultimo Domicilio (Last Domicile) is a work that one yearns to dissect, taking the original tracks and laying them side by side to see where they might intersect.  Few composers can connect so many elements without losing the plot.  de Raymondi plays the piano as if he were in an orchestra; he programs the electronics as if he were in a nightclub; and he layers the drones as if he were in a cathedral.  The end result is a work as engaging as it is brief; five tracks occupy less than eighteen minutes.  One yearns for more of the glitch found on “Sarajevo”, more of the backward masking evident on “Fontenay”, more of the chambered explorations of “Finale”.  But perhaps that’s asking too much of an EP on which everything works.  These songs were meant to accompany photographs, not films, and as such, their brevity is a boon.

Lorenzo Castore’s photographs come to life in Danielo Spano’s video, which provides these images with movement and focus.  Castore’s long project was to “document 5 ‘domiciles’, each with a strong connection to stories of exile and war in European history”. de Raymondi’s music is now their sonic footprint.  The combination of image and music becomes its own liminal space, adding to the blended sense of the release.  Although the music stands on its own, the images add an element of sorrow that is otherwise absent.  In turn, the music adds additional drama to the images.  In short, it’s a perfect collaboration, the first of many to come.  (Richard Allen)