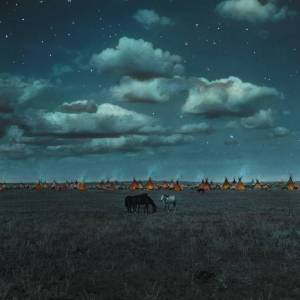 One Night is the sound of America. Many of her states are home to the traditional, permanent sound of the guitar. The instrument seemingly transcends the decades, passing through the 1900’s and into the next century. This isn’t the sound of dry sepia, though. The fabric of One Night is a worn piece of blue denim, and in the front pocket you’ll find a dog-eared photograph of a period that, sadly, passed a while ago. A few still return to that period, because the soil is still fertile. Kyle Fosburgh is an extremely talented guitarist, and he gives the audience the sound of an old America in all her striped splendor. A rapid, finger-plucked pattern burns down the railroad track like a midnight freight train, and from coast to coast the slower pieces carry the heart and soul of a nation.

Ashen canyons yield to faded red rocks as the heavy notes slide and tumble. He peppers his instrumentals with the scent and the sound of past centuries. Campfires still roar, but the thick blades of grass have been suffocated by a severe drought. We can imagine a stretch of virgin land, a rural community that hasn’t been touched by technology or machinery, such is Fosburgh’s ability to render a new, open landscape. In this community, and in the music, the pretty pointless pokes of Facebook don’t exist and a friend request is a simple nod, heavy with respect, shared right there and then between two gentlemen.

In reality, One Night was recorded in under three hours, in the ballroom of an old high-rise building near Chicago. Opener “Fruit of the Vine” is tasteful and optimistic in its romantic inclinations, but the record as a whole drinks in a great deal of respectability and decency. Fosburgh’s playing is always in good taste, and the extra energy of a live performance is justly transferred. The slow dance of the “Venice Waltz” leads to the nine-minute epic “Sky & Earth”, and both are noticeably different. There is something of the old west, of roaming nomads and conquests yet to come to light. It’s exciting to follow the beat-up road, the horses pulling the music this way and that. As the tempo speeds up, so do the legs, trying to escape the blazing intensity of the sun. The incredibly spacious sound of the music perfectly fits the style. There’s a conjuring of the old age, the alternating of the bass fitting in with the open tuning and the stars above. The sky stretches out its purple eye-shadow, and colorful, unusual chord voicings leave splashes of color against the dry ground. Tiny harmonics, a little use of a slide and lovely, strummed open chords come through on the air, leaving behind an unresolved issue in its suspended sound.

His lyrics are never bolted on; they are used to tell the story. In fact, they’re crucial to the song. They are the bones on which the music stands and walks. They reach their crescendo on “Bury My Heart At Wounded Knee”; the track oozes with passion, and it’s something special. The guitar’s strummed fiercely, and the side of the palm is occasionally used to smack the strings. The notes are indeed being buried, pushed deeply into the soil. Like the night itself, the music is a vintage sheet of sound. Modern. Timeless. (James Catchpole)