Compared to how breathless we were by the end of 2018 (see our “2018 Leftovers” mini-series), the first half of 2019 has been lower-key for stand-out videogame soundtrack releases. We at *Press A* had to widen our listening to uncover some of the gems we present below ~ but a gem each one truly is. And we may start to sound like a broken record, but the diversity displayed across them shows how truly exciting, experimental and (in one case) enchantingly retrospective the videogame space currently is. Artists of all kinds are now participating in this flourishing scene, giving us excellent, new, and exciting music in productions that range from the smallest of indies to the biggest of AAAs. There’s outstanding music to be heard in all genres, so whether you’re a modern composition or retro fanatic, there’s something here for you. Also, most soundtracks are now being officially published one way or another, be it in digital or physical format; add that to recent remasters of classics from decades past (Mother 2, Shadow of the Beast), and it’s a pretty good time to be a listener.

In any case, given how the second half is shaping up for videogame releases, we may come to be thankful for the year’s slow awakening!

We’re kicking off with something of unbridled joy and whimsy. Astrologaster delighted us at *Press A* upon first listen with its authentic-sounding recreation of Renaissance vocal music. Comprising 15 madrigals and one closing music piece, this set sings the apparently true story of a “doctor of astrology” curing the sick after legitimate medical doctors flee London during a plague outbreak in 1592. From this surreal conceit are spun darkly witty character anecdotes reaching toward Shakespearean playfulness. Boccadoro’s melodies and harmonies for the vocal quartet are tight and a delight, leaping across rhythms from bouncing swing to hymnal sedateness. But lyricist Neil merits equally rapturous applause by elevating these pieces higher still, from crude descriptions to biting social commentary. (“From a rich lady what is charity but a necessary ruse? ‘Tis the job of wives to draw away our eyes from how riches are accrued.”) From the narrative twist in “Emma Sharpe” to the pithy conclusion about “Robert Devereux” (Tudor history buffs will especially relish), you will double the joy by reading the lyrics along with the music while being whisked briefly back to Elizabethan England, in all its plagued glory. (Chris Redfearn-Murray) 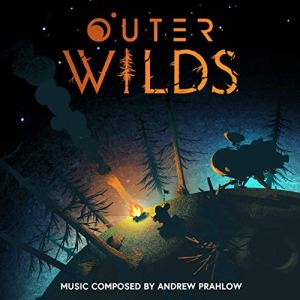 If we had a category for biggest earworm, the main theme of Outer Wilds would win by an outer space mile. That it repeats in so many guises well-reflects a game whose protagonist is caught in a time loop ~ but also threatens to do disservice to a soundtrack so rich in variety and subtlety elsewhere. Charting a course from lulling banjo plucked by a campfire (“Outer Wilds”) to cavernous drones and morose piano of “Nomai Ruins”, we embark on a vast journey caught between the gravitational pulls of beautiful discovery and unsettling abstraction. And, just as in the game, our journey takes no linear path, Prahlow pulling us seemingly erratically through the genres of post-rock, electronic, ambient and drone; short forms that flare then quickly wither like supernovas (“Let There Be Light”, “End Times”); long forms that gently persist or repeat with the quiet menace of black holes (“The Uncertainty Principle”, “The Ash Twin Project”). A slightly laboured final third only marginally detracts from the overall wonder evoked by this set ~ one I can’t wait to experience in situ. (CRM)

Sevilla-based fingerspit is the only artist to reappear from the first-half 2018 list (with The Red Strings Club), and the versatile composer enters here with a trio of pieces from small itch.io games, each distinct yet in combination cohesive. At 20 minutes exactly, closer “Sebastian’s Eternal Home Floristry” is the lengthiest and stand-out track, its languid passages of jazz keys, shimmering synths and, in time, trip-hop beats ‘n bass redolent of pastel-coated summer evenings clearing a bedevilled mind. Veering closer to post-rock, “Daily Tasks (Behind Every Great One)” is more innocent affair of tremolo guitar refrains and pedestrian drums, while the stronger and more evocative “11:45 A Vivid Life” incorporates glitch elements into a more synthesized palette that builds to arpeggiators and (literal) storms. Wonderfully low-key. (CRM)

Accompanying a game centered on a girl trying to confront her depression, Sea of Solitude is an engrossing and provocative listen. The orchestration that drives the set is restrained and discreetly dynamic, with solitary cello or violin often providing the melody and soft arpeggios on the piano forming a backbone to many tracks, as in the touching Romance of “I Picture You Before Me”. Vocal and even choral sections lap against our gently rocking boat to voice the motifs of the game’s characters ~ much like 2018’s Gris. But unlike that Berlinist set, Jackson has woven a far from uniformly morose tapestry, best-exemplified in the switch during “Kay’s Theme” from classical-folk balladry to understated jazzy dub-electronica within a glorious four minutes. Spectral menace ever lurks ‘neath the waters (the low-key bassoon in “Lonely Dark Shadows” a particular highlight), but there is endeavour and triumph to be grasped as well ~ and when, in a reprise of “I Picture You Before Me”, we hear clear lyrics finally breach the surface, it feels as though the protagonist has found a way, if not to cure, but at least to cope. (CRM)

Split into two volumes and an extra EP, Hypnospace Outlaw is the sprawling, heterogeneous soundscape of an imaginary turn-of-the-century internet. Like all those Y2K graphics and adventurous -yet kitschy- personal webpages that emerged at the time, the music is mostly made up of off-genre jingles and amateur electro songs. This aesthetic is not centered upon any one genre, and everything from jazzy pieces to upbeat techno and New Age ambient is transformed into strange relics of a past that never existed. This isn’t nostalgia as melancholy longing, it’s nostalgia as a feverish, colorful hallucination, in which the music seems to follow the right rules, but if you stop to listen, it’s all very subtly wrong in one way or another. It’s silly, often even stupid – you can’t listen to tracks like “Millennium Anthem (2000 New Years Eve)” without cringing. And yet, the stereo ambience at the end is weirdly engaging, which is to say there’s always something interesting in the playful arrangements of all this “outsider” kitsch. (David Murrieta Flores)

You can only get something profound if there’s a surface onto which you can hold. And what is most art, if not pure surface? This album makes the same sorts of gestures: an out-of-focus cover that irritates the mind into trying to make it clear, a cartoon introduction of a track whose levity drops us straight into the depths of drones and a very diffuse form of ambient music, clear synth tones underlined by vast, echoing soundscapes… There is no way to meaningfully distinguish between the surface and whatever lies beyond it, and the same is true of Art Sqool, which constantly dives into different forms of abstract electronic music, often messily and noisily like in “Breathing Sounds”, but always playfully diverting its disturbances into more meditative states. In short, Art Sqool is as deep as it is superficial, which is the triumph of any and all artwork of our time. (DMF)

It’s easy to see how overused the word “epic” is in the world of videogames. What makes Heaven’s Vault so compelling is that it truly fits the word, devoid of its bombast and exaggeration: through both romantic and impressionistic melodies and devices, it tells a story of vast mysteries and their emotional marks upon a wider story, a transcendental mode in which the narrative traverses all the tragedies and joys of wonder. This OST is epic not because of its dimensions or excitement, but because it can suggest a time beyond history, a sacred time in which the classical expressiveness of strings flows with movements not belonging to our everyday cycles. Like The Banner Saga before it, Heaven’s Vault is a world in itself, musical myth-making in action. Now that really is epic. (DMF)

Belying the game’s post-launch reception, Anthem’s soundtrack of high drama and surprising grace continues to impress months after release. By using orchestration augmented by indigineous and electronic instrumentation, Schachner creates an evocative and varied canvass impressively fusing earthly and ancient with alien and prescient ~ the former felt in the grounded, sometimes thunderous percussion and flighty flute melodies; the latter in the arpeggiating synths and corroscating melodies from up high. It has bombastic moments of brass-driven dirge that can feel derivative but, equally, spacious passages of atmosphere and nuance. String melodies that charted a course to triumphant often veer toward ill-ease, and infrequent yet impactful synthesized vocal passages lend a hymnal ~ albeit futuristic ~ sense of majesty. (CRM)

In the wake of soundtracks like Undertale there’s been a current of sweet and simple albums for games that attempt to bring back that youthful meaningfulness with which we used to learn songs by heart. The masterful craft of Koji Kondo and the like meant experimenting with electronic sounds and folding them into dozens of genres whose MIDI transitions led straight into a welcomed form of repetitiveness. Tales From Toppletown draws from that tradition, following Kondo straight into European and Latin folk rhythms and dances re-presented in beeps and boops, a music for children to joyfully sing along and later remember as their own imaginative sounds of (and for) the happiness of play. As such, it is a success, the kind of music that your younger self would’ve wished to live in. (DMF)

Composed by artists from the Wic Recordings roster, Katana ZERO represents perhaps the highest point in synthwave and technoir game soundtracks ever since Hotline Miami burst into the scene. Its coherence and consistence depart from a classicist’s approach to the entire genre, in the sense that it does nothing radically new, but instead comes to perfect and synthesize everything the genre’s already done, from nostalgic pastiche to all those adventurous new forms of tension produced by the clash of noisy, dirty techno with the crystal clarity of 80s-styled pop synths. All those vertiginous edges, crunchy materiality and shiny surfaces are here stabilized into their most paradigmatic sounds, explored in-depth without further deconstruction – essentially, this is the synthwave game OST’s classical referent for the future, the very base from which to build something new, which makes it a landmark of the genre. (DMF)

Disclaimer: We’ve linked to unofficial uploads for those without official streaming/purchase options. If the content creators/owners want us to remove these links, reach out and we will do so immediately.