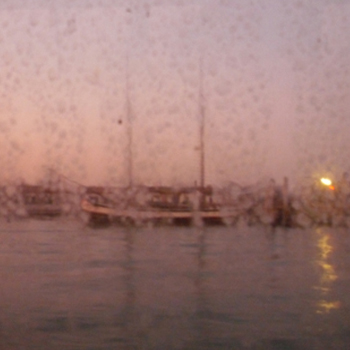 The most recent in a series of mixes by the Lost Children Net Label, and the debut mix for ACL, comes from Enrico Coniglio.  Coniglio is an Italian Guitarist, “environmental sound recordist,” sound artist, and photographer who takes special interest in the aesthetic aspects of the landscape.  This mix is arranged very differently from the themes that structured the past: genre and region.  Instead, Coniglio has chosen tracks from albums he has recently purchased, physically, and created a coherent mood-based mix.
What are some current projects you are working on or have planned?
Enrico: I must say that, since there is so much music around, I think that any musician should take in serious consideration to release less music. This is to give prominence to his work and to ensure that this “market” (I hate to call it like that) is not always permanently inflated. [This calls to mind a recent “Collateral Damage” column with James Kirby in The Wire.]  If I think only on the numbers of album reviews coming out every week, I get seasick. This premise is to say I decided to focus only on a few projects for the 2012. In the next year should be released “Bragòs”, two soundscape compositions – one on each side of the disc – with Taiga Records, a Minneapolis based vinyl-only label. Another album almost finished will come out (label still to be found) with the moniker My Home, Sinking.  This new project – ambient and folk-oriented – features collaborations from Tui (Orla Wren), Katie English (Isnaj Dui)and Laura Sheeran, among the others. Then a DVD designed by Stefano Gentile (owner of Silentes) will come as a video+audio at the name of my sweet sister Francesca; music by Under The Snow (Stefano Gentile/Gianluca Favaron), Ennio Mazzon and myself.
How have you selected the tracks for this mix, what’s the concept behind their organization?

Though I love concepts and all my works has a concept behind, I’m sorry to say the only one for this mix is: music I like from albums purchased in the last couple of months. While I listen to a lot of streaming or free download music, I’m a stubborn disc buyer. Those with the hole in the middle, I mean.

The present mix features music from field-recordings to modern classical, experimental to ambient-drone. I’ve tried to select music that in some way belongs not a supposed kind of “genre”, but a kind of mood can be suitable to the present season. This means it had to be intimate, delicate and slightly inclined toward melancholy.

Making a playlist is like opening the refrigerator and see what you can find inside. The result is the present, it could bemany other ways, but it came like that. Hope you like the taste. Some of the authors may be known, some could be new to you, but the intention was to merge all their music and make if flow well. And the concept itself is definitive on the listener.